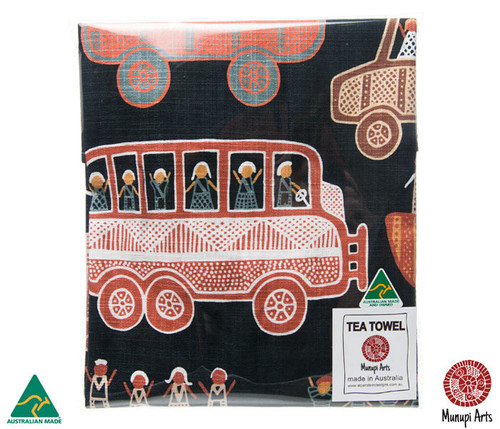 Cotton Tea Towel. Made in Australia.
Based on artwork 'Off to the Footy' by Aboriginal Indigenous artist, Debbie Coombes from Munupi Arts & Craft Association (Tiwi Islands).

Debbie is the daughter of  Florence Puruntatameri-Coombes, and Graeme Coombes. Her mother is a Tiwi woman from Pirlangimpi Community on Melville Island. Her father originated from Queenstown, New Zealand but married Florence as a young man and called Pirlangimpi home for over 30 years. He raised Debbie and her siblings (including sister and fellow artist Karina Coombes) on the islands, visiting New Zealand only a handful of times with his wife and children. Graeme passed away in 2010.Debbie lived and worked in Darwin for over 4 years, returning to live back home in the Tiwi Islands in 2011. From this point Debbie painted under the direction of her grandfather, Justin Puruntatameri and Florence (Justin’s eldest daughter). Justin in particualr was able to give Debbie invaluable advice on what she could correctly portray as defined by her Tiwi family ties. Debbie is now well known in artistic circles for her joyful depictions of Tiwi Life in figurative forms. People travelling by cars and canoes of all shapes and sizes to the football. A huge part of contemporary Tiwi Lifestyle.

Tea Towel - This man is your Friend