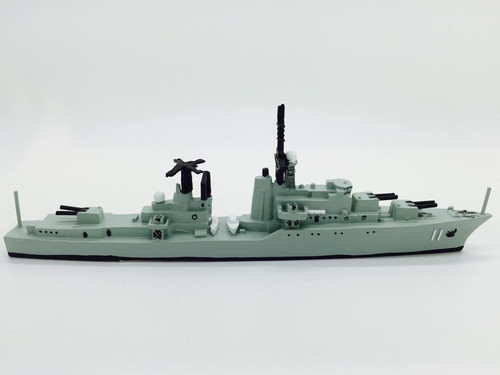 Decorate your bookshelf or desk with this realistic miniature model of Naval Destroyer HMAS Vampire, created exclusively for the Australian National Maritime Museum.

After this, Australia's fighting ships were equipped with missile weaponry. The Daring class were the largest destroyers built in Australia. Their strong, light construction combined high speed with maximum armament.

Vampire served in the Royal Australian Navy from 1959 to 1986. Its arsenal included:

Despite its firepower, Vampire had a peaceful career, even while escorting troops to Vietnam in the 1960s. In 1977, Vampire had a brush with royalty as the RAN escort for HMY Britannia during the Queen's Silver Jubilee tour of Australia. In 1980, it was refitted as a RAN training ship.

Explore the danger and drama of life on board Vampire in Action Stations, our immersive navy experience.