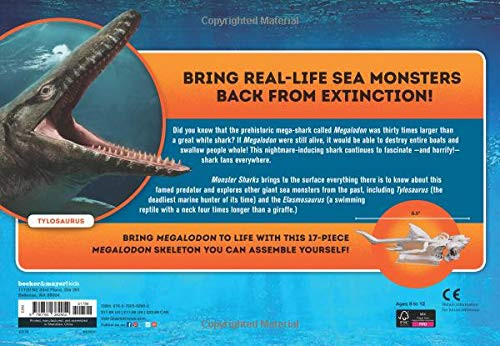 Monster Sharks: Megalodon and Other Giant Prehistoric Predators of the Deep  brings real-life sea monsters back from extinction and up from the ocean depths with its fascinating facts and build-it-yourself Megalodon skeleton.

Did you know that the prehistoric mega-shark called Megalodon was thirty times larger than a great white shark? If Megalodon were still alive, it would be able to destroy entire boats and swallow people whole! This nightmare-inducing shark continues to fascinate—and horrify—shark fans everywhere.

Monster Sharks: Megalodon and Other Giant Prehistoric Predators of the Deepbrings to the surface everything there is to know about this famed monster and explores other giant sea monsters from the past, including Tylosaurus (the deadliest marine hunter of its time) and the Elasmosaurus (a swimming reptile with a neck four times longer than a giraffe.)

Dinosaurs of the Deep