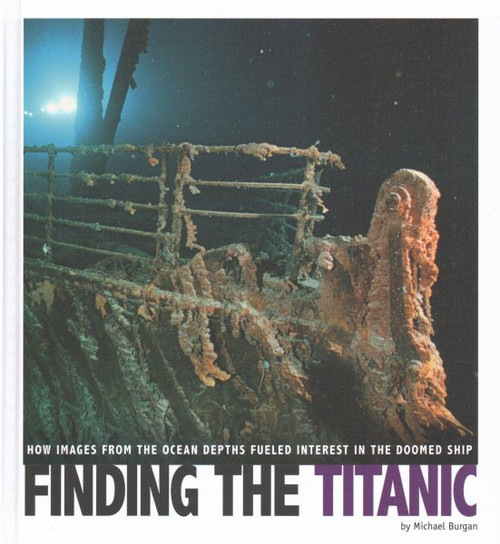 Interest in the Titanic is never-ending, but it wasn't always that way. Interest in the major disaster was quickly eclipsed at the time by the events of World War I and only briefly revived by the 1958 movie, A Night to Remember. Not until Robert Ballard's discovery of the wreckage in 1985 did it become a subject of fascination to the general public. This fascination was largely fueled by the images brought up by Ballard and later excavators and creates the focus of this book.

The story begins with the story of the Titanic and then moves into Ballard's expedition and later discoveries. However, while there is a thorough exposition of Ballard's methods, feelings, and work, there is an extra focus on the technology used to capture images and the subsequent improvements made in the undersea robots used to film the wreckage.

Burgan covers the controversy over how the wreck should be handled and the discussion around the collection and use of artifacts. There's also new evidence about the causes of the sinking and additional discoveries made about the wreckage. Burgan goes into additional discoveries and scientific advances made by Ballard, including the real reason he was able to discover the Titanic - he was searching for Navy submarines that had wrecked in the area.

Back matter includes a timeline, glossary, and resources as well as sources, bibliography, and index.

Exploring the Deep: The Titanic Expeditions

THE SHIP THAT NEVER WAS

Face to Face with Polar Bears